We have among us a species somewhat different from the common nettle that we can see in many parts of Spain. The white nettle (Lamium album) is quite widespread throughout the world and its medicinal properties have been described for more than 1,000 years.

Today, there are several investigations that try to go down the path of observing the cellular response to the extracts of this plant and the development of malignant tumors.

Therefore, it deserves our attention and to comment on what properties have been collected so far and how to take advantage of their benefits.

Description and cultivation of white nettle

White nettle thrives next to gardens, walls, benches, roadsides, hedgerows and many other places in everyday places. Its natural habitat is the mountains of Eastern Europe and Western Asia.

It is believed that its dispersion throughout the world came with the displacement by boat of men, who mixed their seeds along with others of horticultural, food, hay or fertilizer. Its seeds have a great germination capacity and many years of viability.

Dead nettle often grows in fertile and nitrogenous places next to the nettle, and it can be easy to confuse it with other plants when it is not yet in bloom.

However, it is possible for bolder people to differentiate between species before flowering, since the white nettle lacks the characteristic stinger of its relative, and has only normal Bristian hairs.

Is Originally of most of Europe and Central and North Asia. It has also been introduced and naturalized in eastern North America.

Flowering: May-September, although in some warmer areas it lasts until October.

Other common names for Lamium album

White nettle has been used as a medicinal herb since 1000 AD.C., where there are written references to its use from the writings of St. Hildegard of Bingen (1098-1179).

It is and has been a plant widely used in official and folk medicine.

White nettle has the following properties: 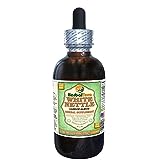 Parts of the plant used

The upper parts of the plant are used as medicinal extracts. The plant is collected when in bloom and used fresh or dried at a temperature of up to 35 ºC for later uses. It has a sweet smell and a slightly bitter taste.

Young leaves can be eaten, raw or cooked. They can be added to salads or cooked as vegetables. The leaves can also be dried for later use as food. They are a good source of vitamin A.

The sweet nectar can be sucked directly from the narrow end of the small white flowers.

It also contains among its phytochemical components rutoside, quercetin and kaempferol and glycoside iridoids (lamalbid, alboside A and B and karyoptoside).

The investigations have been carried out into antibacterial properties of lipophilic and phenolic complexes and the sedative activity of the dry extract obtained from the herb Lamium album (white nettle). In the tests a strong antibacterial activity against Staphylococcus aureus. This bacterium causes respiratory diseases (pneumonia) and disorders of the skin and eyes (conjunctivitis, floliculitis, etc.).

Great activity has also been demonstrated in the face of developmentand Pseudomonas aeruginosa and Candida albicans.

During these trials, some sedative action has been demonstrated for the body when working at a dose of 100 mg/kg body weight. In addition, white nettle can act by reducing the natural stress to which we are subjected (family, work, etc.) with a concentration 10 times lower, of 10 mg / kg of weight.

The results obtained are promising, and the pharmacological mechanisms related to antibiotic, depressive and cerebroprotective activity will continue to be studied.

Line of work against lung cancer

The present study investigated the potential effects against cell development of lung cancer (A549) from different concentrations of methanol and chloroform extracts of Lamium album L.

After 24 and 48 h of incubation, all extracts showed a reduction in cell viability with extracts of methanol (below 2.5 mg/ml) and chloroform (0.5 mg/ml) from plants in vivo.

The stronger cytotoxic effect when methanol extract (5.0 mg/ml) of white nettle cultured in vivo was applied. All the extracts studied decreased the adhesion properties of the cells. The strongest effect showed methanol extract from plants in vivo with a concentration of 4.5 mg/ml.

White dead nettle is primarily considered to be a “women’s herb” and has been used as an herbal remedy for painful and irregular menstruation, pelvic inflammatory disease (PID), vaginal discharge and as a tonic for the uterus.

These benefits can be taken advantage of from the infusion of its leaves or applied in relaxing baths.

These effects can also be obtained using alone or combined the medicinal plant known as bistorta.

How to use the benefits of white nettle

Dosage and administration of Lamium album

Nettle infusion can be made by adding 1 or 2 tablespoons of fresh extract (leaf or flowers) or dried in boiling water. Let the grass soak for 5-10 minutes before straining.

For therapeutic purposes, it is often recommended to drink one cup three times a day.

The nettle White is classified as a “safe herb”. No contraindications, side effects, or interactions with conventional medications or other medicinal herbs have been reported. There have been some cases of small localized allergies that have subsided in the following days.

Caution is advised when collecting the plant from the wild due to its resemblance to nettle.

Any intake of white nettle should be evaluated by a medical professional who advises its taking.